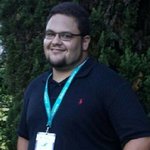 Sports writing is something I knew I'd get into since the first time I started writing anything. I love to tell a story, but I'll admit I'm lazy. With sports I can just write about what happens on the field, then fill in a little bit of analysis and opinions from time to time.

I was born in Charleston, South Carolina on October 21, 1983 to two Cuban parents (one from Chicago, the other from Boston via Miami), and moved to Miami when I was six weeks old. Since then I've been immersed as a Miami-sports fan (with the exception of the Marlins since I decided to follow my father into being a Cubs fan). The Dolphins are my first sports-love and the team I'm a Featured Columnist of on this fair site, but I'm also a huge Heat fan and will write about them from time to time. I'm not the typical Miami "bandwagon" fan, I'm with my team through the end (and lord know's I've been tested, thank you Stephen Ross and Jeff Ireland!).

I also like debating anyone, anywhere, at any time about any subject. I'm opinionated but not stubborn, I'll admit I'm wrong when I'm proven wrong and raise the hand of the victor of such a debate. I also like to write short stories and am always available to freelance in my spare time.