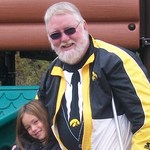 I'm a 59 yr. old man, who has been disabled for about 6 years now due to a series of surgeries that started with my back, then nerve damage in my legs & feet and finally a unique condition was discovered in my spine. I worked in factories most of my life. I was very active in high school "back in the day". I was a tackle in football & a HWT. in wrestling. Also active in school plays, student government, newspaper, yearbook, etc., etc. I attended junior college one year & tried to enter US Navy in '73 but an injury from a farm accident prevented me from getting in. I've been married over 32 years to a wonderful woman & have 2 great adult 'kids' plus two grandaughters who helps to keep my spirits up.And I have another grandchild on the way come early September. And I believe I've converted both my son-in-law & my daughter-in-law into becoming Hawkeye fans also. Life is good in many ways but never take your health or physicality for granted. It could be here today & gone tomorrow as I've found out. Yet I know there are others who have it worse & many are children who never really had a chance or the opportunities that many of us have had. Good luck to you & your team[s]! And Go Hawks!!!

Turk does not have any awards.