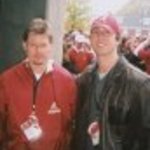 I am a Boxer with a Boxer's mentality and most days I'm smarter than a 5th grader. Today may or may not be one of those days...

D does not have any favorite writers.