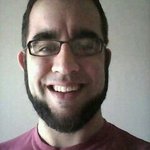 I'm a bit of a motorsports fiend, to be honest with you. I'm a father, a husband, and a purveyor of fine arts and Coca-Cola. Granted, Stephen King may be my idol, but I'm pretty amazing. I'm a former newspaper editor (Hall County Herald in Memphis, TX), and a 2010 graduate of the University of Science and Arts of Oklahoma (with a BA in, you guessed it, Communication). I also have a Twitter (@JosephShelton88), and you're more than welcome to follow me, but I only use it so I can be a bit of a jerk. Go Sooners!