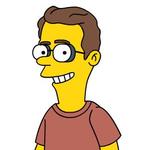 When I'm not sipping latte's in the Emerald City, I'm venting about athletes and the state of sports in general. When I'm not doing either of those, I'm writing a blog.

Dave is not a member of any communities.