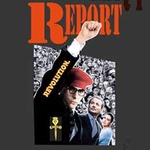 I would love to fill this bio out, but one of the things I am worst at is talking about myself. I will do my best though.. I live in Southern California and have a very wide range of interests from art(sculpting/drawing) to science(inventing) to sports to filmmaking(animation).

While I don't have a wide ranging interest in sports, I am very passionate about the sports and sports figures I do like. So please forgive my ranting and raving at times.

I also don't shy away from controversy, so please read at your own risk and I hope I don't offend. I just can't help but speak my mind, even if I'm completely in the minority. In fact, in those instances, I tend to voice my opinion even more.