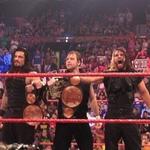 Hi! I am Sports Lover,popularly known as the man of many questions.I am 14 years old and hail from Manchester,England .I've been on B/R for quite some time,seen it all,done it all.........I am of many sports and follow football,pro wrestling,football(not soccer) and MMA closely........Also follow other sports like golf,tennis,baseball and NASCAR.

WE ARE HEELS
Team Heel: “Either you’re with us, or against us

I am also a member of the BURIAL SQUAD along with:
Jeremy Hollywood
Olli Seppala
The Sword
Triple H'Shovel
Stephen the Housekeeper
Cody Crain the Future of Wreslting
And..The man formerly known as Triphe H

Favorite writer is Dan Brown.For me,Brown has become synonymous with thrill!I have read all his thrillers("book" is an understatement :D)and each one just pierces our brain and compels us to appreciate,admire and love the magic of nature and science.He has taken science fiction to a great level of perfection,describing every technology in a highly intricate manner.In a nutshell Dan is a prodigy I bet you can't just read one of his books and be down with it .You want more.Dan actually "grips you like a vice"
#OneofyourcrazyfansDB!

The sky was dark
The moon was high
All alone
Just her and I
Her hair so soft
Her eyes so blue
I knew just what
She wanted to do
Her skin so soft
Her legs so fine
I ran my fingers
Down her spine
I didn't know how
But I tried my best
To place my hand
On her breasts
I remember my fear
My fast beating heart
But slowly she spread
Her legs apart
And when she did it
I felt no shame
All at once
The white stuff came
At last it's finished
It's all over now
My first time
Milking a cow!
▬▬▬▬▬▬▬▬▬▬▬▬▬▬▬▬▬▬▬▬▬▬▬▬▬▬▬▬▬▬▬▬▬▬▬▬▬▬▬▬▬
My friends and I want to retire some overused words,honor some time-tested ones and welcome a new set.

Cool:A word used to denote a relatively low temperature can now be used to substitute a mere yes or even something that can send temperatures soaring. A very well- planned party can be cool, so can a magnificent photograph of a landscape. And if only it had stopped at that! The spellings are not only disastrous but scarring as well.

Example? A: " Meet me at 5 today?" B: " Cool." or " Kewl party boss" or " This is soooo Kool" ( Referring to the new app installed in someone's phone maybe).
AWW Anything remotely cute or pretty is ' Aww'- worthy nowadays. Just a form of expression, the over- usage of which is slowly driving people to brain- death. Have a pretty baby or a puppy in your profile picture? Be ready to be drowned in the ' Awwwwwwwwwws'. Two ' w' s it is still acceptable but when the aww lasts for more than a five- second time frame, that numbness sets it. Said in a particular tone, aww can be fatal.
Example? Boyfriend: You are the best thing that happened to me.

Girlfriend: Really? You too.

WHATEVER:Used to emphasise a lack of restriction in referring to any thing or amount, no matter what — " do whatever you like" — is what the dictionary says is the meaning of the word but now it implies indifference. Sheer, cold, indifference and we want it gone! Example? " Don't like something?" " Eh, whatever" or " I am really sorry." " Whatever" or " What do you think of my new watch?" " Whatevs" ( Yes, that too!) WHATEVER Firstly,
STUFF:Firstly, this is an uncountable noun. So it does not, we repeat, does NOT have a plural form. Saying " Stuffs" will end with your date walking out on you if her grasp of grammar is not at the same level as yours ( yes that was snide!). Secondly, stuff means tangible material that goes into the making of an object and NOT every random thing you forgot the name of ! Example? " What kind of stuff do you read and listen to?" (Clearly, for you, the answer to it is Sydney Sheldon and Eminem)

YOU KNOW:Common sense says this phrase would imply something someone already has knowledge of but, surprise, surprise! Modern usage ironically means exactly the opposite. Used frequently to substitute words one has forgotten, " You know" in common parlance is nothing but annoying. I mean if YOU really knew then you wouldn't be telling me that in the first place, right? Example? A: " Where exactly is this new place?" B: " Hey, that place you know? By that, you know, Metro station." ( Yes! THAT helped.)

THINGY:Adding a y at the end of the word is not, well, cool. It refers to any object and how about we let it remain one? Example: " I wore that thingy you gave me, yesterday." THINGY "
PEACE: The state prevailing during the absence of war" is taken a little too literally by the youth of today. Every conversation can now be ended with " peace" sometimes coupled with a ' V' sign. Not only is it pointless but also becomes unbearable when people end up saying " piss" instead of peace.

LYADH:It is usually used to signify laziness and can be used as a noun, adjective, verb and adverb and is one of the most popular words across campuses.Example? " Let's bunk class today. I am very lyadh

DUDE: It actually means a male individual but is used as an accompaniment to a sentence or to refer to someone completely calm and chilled out.

Example? " Dude, are you out of your mind?" or " He is the only professor who who does not give us a lot of trouble for bunking classes. A total doode."
DUH: It is a less time consuming way of saying " Isn't it obvious?"The word ' like' often precedes ' duh'. Example? A: " Forgetting our anniversary didn't go down well with my girlfriend." B: " Like, Duh!"

I am now available as Arnav

Sports does not have any awards.