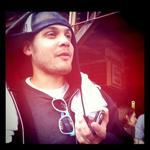 Once upon a time, I covered sports for an actual newspaper. You know, that tangible paper-like thing that occasionally smears ink on your fingers and doubles as toilet paper when the cupboard is bare. One time, this irate caller told me I was "worse than a used car salesman." Another gentleman told me I "was that guy who would follow everyone if they were all jumping off of a bridge."

I've been published in a bunch of tiny rags in various parts of Northern California that (hopefully) you've never heard of and spent a year and a half putting typos into The San Francisco Chronicle's agate section.

And it's not like it matters for email exchanges, but it's pronounced "sway-bee": sean@bleacherreport.com.

I graduated from UCSB in 2006 with a degree in Film Studies and a minor in Semi-Intoxicated Beach Cruiser Riding.