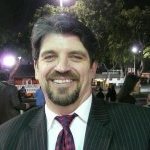 Originally from Eden, New York, grew up as a fan of the Buffalo Bills, Buffalo Sabres and the Buffalo Braves. Attended college in Pennsylvania (undergrad degree from Slippery Rock University) and Oklahoma (master's degree from O.U.). Settled down in Southern California for 27 years before relocating to Connecticut in 2010 to help out my family.

I began writing for Bleacher Report in 2009, focusing on the Buffalo Bills. Highlights included interviewing Jim Kelly and C.J. Spiller. In May 2011, I was promoted to NFL National Columnist. In August 2011, I realized my initial goal of reaching 1 million readers. Thanks to the growth of Bleacher Report, as of February 2013, my contributions have generated over 6 million readers.

My articles have been featured in the National Football Post, Forbes.com, USA Today, Los Angeles Times.com. and had an article sponsored by NFL Network. Thanks to all of the Bleacher Report readers that support my work and take the time to comment.

You can hear me on various radio shows, where I talk about the NFL in general or the Buffalo Bills specifically. Most recent radio appearance was the Artie Clear Show out of Philadelphia for Super Bowl XLVII.

Dan is not a member of any communities.