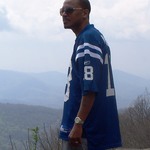 Hello, my name is Hadarii Jones. I have been a sports fan all of my life and have a particular love for roundball. I will write about other sports however, because I feel myself drawn to the emotion and the drama and the spectacle of different sports. I would like to thank Bleacher Report for giving me a platform in which to share my views in a debatable manner. Since I have been a member I have been witness to some amazing writers. I won't call any names, but thank you for the criticism, and for helping me grow as a writer.