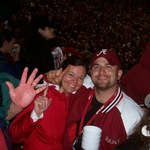 I am a 29 year old small business owner. I served 4years in the Active army and 4years in the National Gaurd. I spent 28months in total in Iraq/Kuwait. I have been a passionate SEC fan my whole life and never miss an Alabama football game. I have a very beautiful wife who I am lucky to have. I have two step children 13 and 17 yall pray for me. I am about three things My God, My Family, and Alabama football and yes it is in that order. I hope to share some insite and passion on the things that I care about,