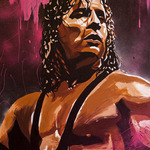 It's a new year and enough is enough, it's time for a change.

English-Canadian, live right here in Calgary, Alberta, out in the acreages, in the peace and quiet. Currently I work for local government, policy advisory being my strong suit.

I'm an old school fan, but when I say old school, I really mean it. I've been a fan of pro wrestling since 1987, though I was just four years old at the time. It's been a fine, rather peculiar ride. From WCCW, the NWA and JCP to WWf and WCW, and now to the present day WWE I have seen a lot of things, some good and some bad, but when all is said and done I love pro wrestling.

I am a fan of Puroresu, Japanese Pro Wrestling, especially New Japan's Strong Style. I follow the action there quite closely and I feel WWE and New Japan can learn a lot from one another. Personal favourites of mine today would be Hirooki Goto, Hiroshi Tanahashi, No Limit, and Minoru Suzuki.

Here's a quick rundown of my favourites in wrestling, both stars of today and yesteryear:

Bret Hart - As a young child growing up in Calgary hero worshipping Bret was the norm.
Randy Savage - When people talk about the greatest of all time we all know who they mean.
Rick Rude - Swagger and narcissism personified. Rick Rude was one of the toughest and most talented men in the business.
The Ultimate Warrior - Childhood favourite. Somewhat of a guilty pleasure to me.
Kurt Angle - Perhaps the most complete package in wrestling since Randy Savage.

I enjoyed the work of Dusty Rhodes, Barry Windham, Roddy Piper, Mr. Wonderful Paul Orndorff and Owen Hart as well. The beauty of wrestling is that there is something for everyone.

Some of today's stars I enjoy seeing are Wade Barrett, Christian, CM Punk, the Shield and Tyson Kidd.

I am heavily invested in NXT, with some of my favourites being Bray Wyatt, Leo Kruger and Bo Dallas.

I'm a traditionalist in some ways, I am often overcome with a bizarre wave of nostalgia, so forgive me if come across as old fashioned at times. I can be passionate and at times aggressive, and if I do, I apologize in advance, it is simply because I care and love pro wrestling.

I'm always down for a chat, whether it be in pro wrestling, association football, politics, movies, TV, books or whatever else you want to discuss.

Currently watching: Community, the Americans, the Office, Hannibal and will soon be seeing Homeland this September!

Alden does not have any awards.

Alden is not a member of any communities.