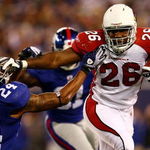 I write about NFL and Fantasy Football on my blog Undrafteds
http://undrafteds.com/

If you want to know more...

Sports were my life when I was a kid. The ball changed with the season. I played it all, but my passion was and always has been football.

I was an undersized linebacker with tenacity, and the fundamentals and foot speed to make up for my lack of bulk.

Defense was always my thing and I am confident I should have continued playing but alas, I discovered drumming and what being in a gigging rock band was like at the early age of 14, so my sports aspirations took a backseat.

From that early age of 14 until I was about 30, music was my life. I have played all kinds of music and released two solo CDs. My wife provides most of my discography here:
http://shimmerglimpse.squarespace.com/shimmerglimpse/2005/8/19/ode-to-chris-farmer.html

I play drums, guitar, bass, piano and anything available, all self taught.

Most people in the "underground" music world know me as the drummer from the band Breadwinner: