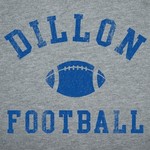 Welcome to my page sports fans,

I used to be a Featured Columnist of the Heat here on Bleacher Report, and cite my biggest achievements as having an article featured on the LA Times website as well as reaching 100K reads here on B/R.