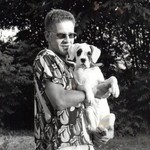 I am a big hockey fan. I believe the most imperative issue in the hockey world is the removal of Gary Bettman from it.