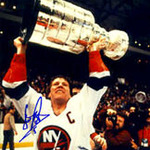 I have been a hockey fan for over 40 years and an Islander fan for 35 of those years. I first took an interest in the team in 1975. They were having their first playoff successes as I was going through the agony that was the end of the Vietnam conflict and the Mayaguez operation in April and May of that year.

Being able to follow the beginnings of their rise to glory at a time when my other teams--the baseball Mets and the football Giants--were not doing well was therapeutic.

It was around that time that I dedicated my life to God and promised Him that I would try to make the world a better place in memory of three Marines who were left behind and murdered by the Khmer Rouge during the Mayaguez operation.

My life has come full circle. In the space of less than a half year (December, 2005-May, 2006), I met my wife Laura-Lea and daughter Miranda, was diagnosed with Chronic Lymphocytic Leukemia (CLL), the same disease which killed my dad, married Laura-Lea, and moved 3700 miles from Leesburg, FL to Terrace, BC.

Once up here, I found out what a long and torturous process it is to get residence status. It took me from May, 2006 to March, 2007 to get all the elements of my application together and it has taken Immigration Canada just over three years and one month to approve my application--only partly due to my CLL. I am still waiting for IC to send me my Permanent Resident card!

I had worked all my life from the paper route I had at 12 years old until I came to Canada. Lack of legal standing has kept me from working for over four years and I have had to go back and forth to NY for medical treatment at the VA Medical Center in Northport.

A new family, a serious illness, and unemployment forced me to begin working to fulfill the promises I made to God all those years ago. For several years, I have been trying to get a program called "One World, One Community" established. It would create non-governmental organizations (NGOs) in US high schools that would benefit the local community as well as a partnered Developing World community. I have also been working on various projects to benefit people here in Terrace.

In the midst of all this, back come the Islanders. Under the superb guidance of Garth Snow, Ken Morrow, and Ryan Jankowski, the core of a champion is once again being built on Long Island. Also, the good citizens of Terrace were inspired to make a winning bid in the Kraft Hockeyville contest and the Islanders literally came here last September.

This blog will chronicle the Islanders' resurrection AND my efforts to keep my promise.

BC does not have any favorite writers.