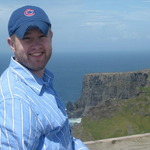 As far back as I can remember, I've loved sports. As the product of a Jayhawk and a Volunteer, raised as a Cub in the land where wild Reds run free, and indoctrinated into the churches of Who Dey?, Miller Time and Patrick Roy, it seemed all I did was watch sports, read about sports, talk about sports.

When I made the devastating realization that my career aspirations in the NBA or the MLS were kaput due to a medical condition known as "Lack of Talent", I settled instead upon writing about the sports I so obsessed over.

A 2009 graduate of Hanover College, where I settled into a role as a sports columnist, then editor, then editor-in-chief of the college paper, I spent the months immediately following my graduation covering high school sports in the Indianapolis area for a now defunct website.

I've worked as a PA announcer for the Western and Southern Financial Group Masters and Women's Open, which allowed me to sit and chat with Novak Djokovic for 20 minutes about nothing in particular, while I was announcing a match on grandstand court. I have also made a career out of simultaneously amazing and annoying everyone around me with my seemingly endless knowledge of all things sports (although I don't get paid for that, so it's really more of a hobby).

I've been a fantasy sports addict for years now, starting in 7th grade with baseball, but quickly branching out to football, basketball, hockey, and on occasion, NASCAR. I've always had a love of analyzing games as they were going on, a habit that started with my father (since I had to dictate what was going on during Tennessee football games; he refused to watch and stood in the hall, asking me what was going on).

The Chicago Cubs have always been my baseball team of choice (although the Reds have a special place in my heart too), while the Bengals and Bears quickly became my teams in football (the padded kind, not the GOOOOOOOOL!!! kind) and Reggie Miller won me over back when he battled Jordan's Bulls. Lacking a hockey team in close proximity to me for most of my youth, I settled upon the Habs and Avs; the Avs because Patrick Roy was my favorite player; the Habs because of the history. Despite playing football (the GOOOOOL!!! variety) for my entire childhood, I was a little late to the European professional scene, settling on Glasgow Celtic, Newcastle, Manchester United, Fiorentina, and Barcelona. I found myself as a member of the Tartan Army internationally, although I do root for England and the Netherlands as well.

My college rooting interests were indoctrinated in my mind at a young age, and I will forever be a Jayhawk and a Volunteer.

I play a pair of Irish sports, hurling and gaelic football, one of which involves a stick, a ball, and hand eye coordination, the other of which involves a soccer ball and your hands. They're both incredibly addicting; I highly recommend looking them up and possibly trying them.