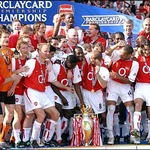 Hi there I am just a glorified Arsenal fan in the heart of London but I like a good football debate and I am ready to go tooth and nail on opinions with anyone as the pen, or in this case the keyboard, is mightier than the sword. Please leave comments or rate my stuff if you ever get the time to read it.