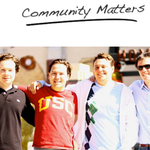 Community Matters is a column written by Zander Freund, Co-Founder and Community GM of Bleacher Report.

Look to Community Matters for updates on the progress of new B/R features, improvements to existing features, responses and official positions on the latest community-wide discussions and disputes, and insight into the strategic decisions of company management.

Community is not a member of any communities.

Community does not have any favorite writers.