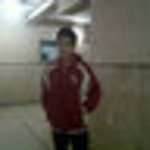 Nour has yet to fill out a bio.

Nour does not have any awards.

Nour is not a member of any communities.