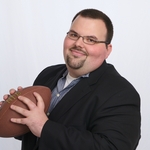 —Born and raised in Michigan. Spent some time in Minnesota, and now live in sunny Florida.