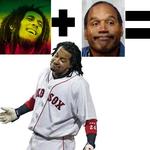 I Am Not French

I hate homer fans. Get it through your impractical thick skull that the refs are not out to get you or your team.

He who is not of the French persuasion is a big time fan of football and hockey. I also enjoy watching good baseball (hard to find) and good basketball. (this will retire with Tim Duncan) I'm very old school in my views of sports (and just bout everything I guess) I believe in the playing the game the way it was meant to be played, respecting the game and its history, and always playing with good sportsmanship.

I am biased, just like anyone who really loves their teams, but I pride myself on seeing through the BS and calling it like it is. I happen to live an area with the least realistic/informed sports fans in the country. I just love going to the pub to watch the games and listening to moron Duck and Beavers fans scream nonsense at the TV. I was proud to be the only person in one our local giant sports bars to loudly root for the Utes to pimp slap the Beavs and clip their roses.

In addition, I'm a big time beer and movie snob. I don't like the mainstream types of either, as Hollywood mainly puts out junk, and the Macro-brews are just awful. I am also a high school football coach out here, and I never thought this job could be so difficult. Kids are so lazy now, and they just seem to be less and less committed to the team concept....ah, I miss the good old days...

One last thing: I don't believe Joe DiMaggio gets the all time props he deserves. The Yankee Clipper is by far my favorite athlete of all time, and with a stat line like his it is easy to see why. He is the only player to be selected to the All Star game in EVERY season he played, 13 of em. In those 13 years he won 9 world series titles. 3x MVP. At the time he retired, he was top 6 in homers and slugging. You have to admire Joe for his incredible ability at the plate, and playing center field. Also (one of the things I love most about him) he retired at the peak of his career, with plenty of gas still in the tank, so we never saw a watered down version of him. He left, injury riddled, but not broken saying: "When baseball is no longer fun, it's no longer a game." Freaking studly and classy. Not to mention he was married to Marilyn Monroe. How does a guy like that NOT become a first ballot HOFer? He had to wait for his 3rd year and still got less than 90% of the votes. The baseball writers are ridiculous about their balloting, and always have been.

I lied, one more last thing...to the other contributors out there: Please stop declaring war on the English language. Know the difference between there, their and they're. Thank you.

I Am Not French does not have any awards.