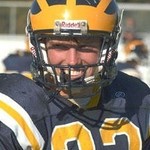 I am a 22 year old graduate from Claremont McKenna College, who was born and raised in the San Francisco Bay area.

Contrary to popular belief, Claremont McKenna is not a junior college, but actually a top ten nationally ranked liberal arts college. While there I majored in Economics and Psychology with a minor in Leadership. I graduated with honors, and consistently made the Dean's List with a top 10% GPA in my respective class.

I also have great skin.

I am a lifelong Bay area sports fan with a particular following of the NFL. I attended Menlo School, where I lettered in Football, Soccer, and Lacrosse.

Throughout my academic career, I have contributed to the news sources of my respective schools, serving as an editor, sports writer, staff writer, and campus analyst.

Although not acknowledged as a "contribution" per say, I additionally have made a career of spamming the mailboxes of East-coast biased sports analysts.

My overall life aspiration is to work in the professional sports industry in any capacity. Whether it's front office operations, marketing, finance, public relations, beat-writing, or serving as a boat captain for the Minnesota Vikings, there isn't an industry in the world I'd rather be in than sports.

I am such a homer my Fantasy Football teams look like NFL practice squads.

I once paid $30 for a Bertrand Berry autographed football on NFLAuction.com. Unlike my bidding competition, I wasn't a fan of Bertrand Berry. In simply touching a $120 officially licensed NFL football, a Cardinal player devalued it by 75%. That alone was worth the $30. Now I own the proof.

To be honest, I'm a pretty big deal in the National Football League.
My 2 proverbial claims to fame include:

1) Julian Edelman (2009 New England Patriot 7th round draft pick, future NFL wildcat star) sprained my ankle in a high school preseason scrimmage by means of the most devastating ankle breaker known to man. (It was the pride, not the ankle, that really hurt that day).

2) Johnathan Stewart (2008 Carolina Panther's 1st round draft pick) trucked me onto my back during running back drills at a D-1 football recruiting camp. At that point, the coaches at Oregon must have realized they had no spot for a 6'3, 195 lb, uncoordinated, Caucasian running back. Myth has it that this event was the main inspiration behind the Madden "truck-stick" application. I still shutter when I read his 95 "TRUCKING" rating.