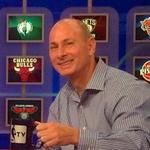 I've worked as a sportswriter at two daily newspapers, written text for baseball, basketball and football cards backs for Fleer and have interned at the home of hockey maven Stan Fischler. I've also served as a managing editor at a daily newspaper, entertainment publication and most recently, Wizard Entertainment, where I helped oversee the daily operations of four national pop culture mags, four national conventions and two websites.

But my first love has always been sports dating back to when my parents took me to see Lew Alcindor (yes, it was the pre-Kareem days) and the Bucks play Walt Frazier and the Knicks.

I'm a lifelong New Yorker, except for that one year I spent in Chicago, which was the longest year of my life when Charles Smith couldn't dunk the ball when we had Jordan and the Bulls on the ropes. The New York guy took plenty of abuse that summer.

I'm also a huge college basketball buff and have been to the NCAA Tournament numerous times. I've seen Jason Kidd and Cal end Bobby Hurley's Duke career and Kerry Kittles and Nova go to three OTs vs. Old Dominion. I've had beers in Rex Chapman's sports bar 3's in Lexington and bought a CBS Sports vest off an employee for $200 in a post-game celebration of one particularly gratifying win. (But that's a whole other story)

Baseball is a huge passion of mine and I love fantasy baseball. I'm still haunted by the memory of taking Joe Carter with the No. 2 pick in 1987 and passing on Eric Davis, who went on to a 37-homer, 50-steal season.