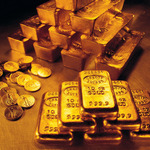 Mr. Mark is a big fan of Pro Wrestling as well. Randy Orton, Triple H, and the Big Show are his favorite active wrestlers 1, 2, 3.

MR. MARK is not a member of any communities.