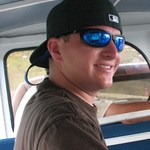 I'm Bryan. I am currently a journalism major in my junior year of college at the University of Florida. My goal is to break into the wonderful and now nearly extinct world of sports journalism (your prayers and well wishes will be appreciated). Thanks for reading, and feel free to look into what I write and tell me what you think.

I am also the proud co-author of SportsCasualties.wordpress.com, a blog that covers the world of sports and the less important world around it. Please check it out.