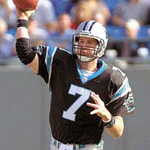 I'm a hardcore fan of the Carolina Panthers. I've been fan since the franchise's inception. I have attended five Panther games (six regular season games and one pre-season game. All of them have been in Charlotte). I became a fan when I received my sibling's Carolina Panthers' sweater. I didn't know who they were, but I liked them from that point forward. I remember people creating a buzz that the NFL was coming to the Carolinas. I recall that I didn't have the faintest clue what sport they played, but I remember I liked them from that day forward. I eventually did figure out what sport they played during the 1995 NFL Pre-Season. I remember when Dom Capers became the head coach and everyone was thinking Super Bowl since he was the defensive coordinator for the Pittsburgh Steelers between 1992-1994. I have memories of the ever aggressive coach, George Seifert. I remember the good, when they went to the Super Bowl in only eight years of existence. I also remember the bad, when they went 1-15 and lost fifteen straight (thank God for the Detroit Lions). Then I remember the ugly, when Carolina traded two first round picks for Sean Gilbert who never came close to meeting expectations.

Football is my passion and if I ever to get a shot at playing again I'm going to make the most of it and hopefully reach where I would like to go.

I'm also a big fan of the New York Mets, but I generally don't get much of chance to watch their games since I live in Braves territory, so I get stuck with their mediocre play, but I still see the Mets play them (those are like the only games I can catch the Mets playing). I would love to attend a game in New York or Atlanta or wherever I can get a ticket.

I am an avid runner and I've just recently lettered in cross country. If I ever get the chance I would like to be cross country coach for a high school someday when I get established.

Finally, I signed up to Bleacher Report, because I had aspirations to be a Sportswriter and I wanted to acquire some experience before I head off to college. My aspirations have since changed and now I write, because I enjoy writing in general and I have a natural love for sports. I'm a perfectionist so, if I'm doing anything wrong or if you want to give some advice just write on my bulletin board. Thanks!

Mark is not a member of any communities.