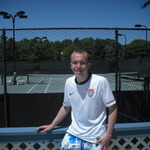 Saturday, December 28, 2013 - Reached 2 Million Reads. Thank you to everyone who has ever read one of my articles!

I originally became a sports fan by watching some major sporting events without realizing it (1998 World Cup final, 1999 Champions League final, 1999 MLB Playoffs etc), and from the excitement that I got from watching these games, I started to take a deeper interest into many different types of sports all throughout the world.

In 2000, my New York Mets were able to make it to the World Series, and I started to follow all of the sports that I either played or watched on TV.

Almost three years ago, I was searching Google when I came across an article that criticized Federico Macheda after he scored the winning goal for Manchester United over Aston Villa that Sunday, which was on this site. After seeing it and reading it, I realized that I could write something better than that, and that caused me to start my career here on B/R.

During my time here, I have come across many different crazy characters that have existed on this website, and with them, they have helped me discover that there is always two sides to every story and at the same time have made me a better writer, and have made me more knowledgeable about sports.

I also support all sports except for sports that are non-athletic (Sorry Billiards and Darts; that means you)!

Also, please don't hesitate to post an article to me on my Bulletin Board or comment on one of my articles, no matter what the subject is, as it will help me improve and I will DEFINITELY leave you a response of some sorts to whatever message I get.