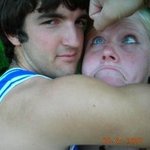 I love the opportunities Bleacher Report brings me, and I love representing one of the greatest colleges in the United States of America even more. I have been a Jayhawk as long as I can remember and will always be a Jayhawk no matter what.

Pardon the cliche, but nothing would please me more than getting paid to watch sports. I would also like to be a missionary at some point, and maybe teach or coach a subject or sport at a grade-school level.

Outside of sports, I love my family, eating (chicken, pasta, and chocolate), God, cartoons, and a wonderful blond-haired nursing major by the name of Heather.