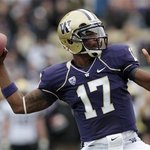 I bleed Washington purple and gold. I have loved the University of Washington ever since I moved to Washington as a kid and the first game I watched was the 1991 Rose bowl. I love just about every aspect of sports: the competition, the skill, the analysis, and the camraderie. I love looking at sports through a variety of lenses to learn something new to gain a deeper understanding. I sports write purely as a hobby and look forward to providing my own perspective to the Bleacher Report universe.