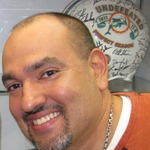 Richard earned an MBA from Florida International University in 1998 and has written for Bleacher Report since December 2012. Follow him on Google+ and Twitter https://twitter.com/RiSantamaria. Richard began his sports-writing career with PhinPhanatic in March 2012. Richard lives in South Florida and closely follows the Miami Dolphins and Miami Heat.