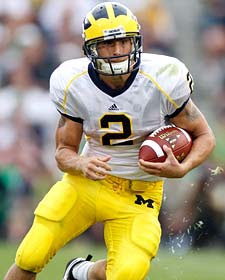 It seems the strain of a 3-9 season, the depth chart, the Michigan weather, and position changes are making players leave the program. We know of two players that are gone, and one of Michigan's high-profile recruits may be leaning towards leaving the program as well.

Rich Rodriguez confirmed today on the Big Ten Teleconference that sophomore WR Zion Babb is no longer on the team as of last Sunday. Babb played in six games this year and had two catches for 45 yards.
We have also learned that sophomore LB/S Artis Chambers has also told coaches that he is leaving the team and plans to transfer.
The biggest news is that Sam McGuffie as of right now is planning on transferring. Please note, neither the Chambers nor McGuffie transfers have been officially confirmed by U of M. But sources around the program are saying they both are planning to leave.
Sam has had an up and down year. He looked great at times—see the Notre Dame game—and very average other times. He has lost his starting spot to Brandon Minor and this past weekend to Carlos Brown. He recently was recovering from a concussion and got banged up in the Minnesota win two weeks ago.
On Saturday Sam pulled himself out of the Northwestern game before kickoff. The rumor mill is saying that Sam doesn't like the cold weather, has asked to move to slot receiver, and might have had some problems getting along with teammates.
Here is my take: Sam is a young man that is far away from home and has shown flashes in his first year but has taken some big hits. I believe he realizes that his talent isn't above and beyond like it was in high school, and his frame is small for a Big Ten running back.
With all that said, Sam is a talented young man and can be a very good college football player. I hope he takes some time to reflect on this decision and doesn't make it during the grieving process due to the loss of a family member, a 3-9 season, and coming off a couple of injuries.
Sam, here is my advice to you: Take some time over the holiday with your family and make the best decision for you. You gained a ton of experience this year, and there will be plenty of touches available for you next year. You can play football at Michigan and earn a valuable degree.
Good luck with your decision, and I hope you stay with Michigan. The best is yet to come! (Call Braylon Edwards if you need someone to talk to. Braylon struggled with the same thing you are, and things worked out pretty well for him.)