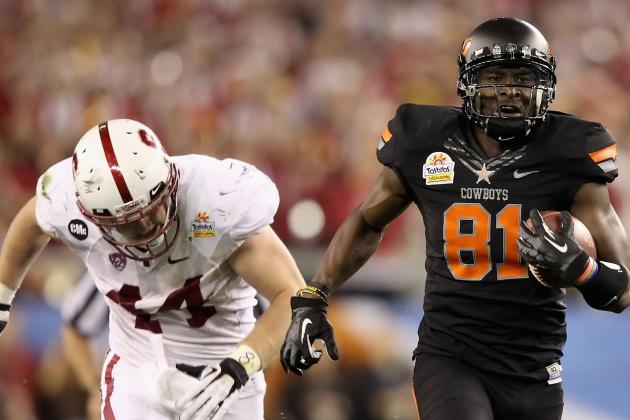 Suggesting the term “trade down” to  Browns  fans will not help you win any popularity contests in Cleveland these days. Although last year’s downward swap with the Atlanta Falcons in the NFL draft yielded mostly positive results, many Browns fans are fed up with procrastinating and want to draft their impact player right now.

But what if the Cleveland Browns could actually accomplish both—trade down (albeit mildly), grab their impact player, and still amass another high second-round choice?

As the Browns enter their Plan B strategy for the 2012 NFL draft, three high-impact players are staring directly at the Browns, and all three should be available by the time their clock starts ticking on national TV  on April 26.  Oklahoma State WR Justin Blackmon, Alabama RB Trent Richardson, and LSU CB Morris Claiborne by all indications should be impact NFL starters and potential Pro Bowl performers.

A reasonable person can make the case for selecting any one of those three players at the #4 spot. Claiborne—-when paired with the Joe Haden—- would give the Browns two of the best young corners in the entire league. How important would that tandem be in 2012 when the Browns will have to face some of the top QBs in the league?

Blackmon is widely known as the best receiver in this year’s draft and the Browns arguably have the least talented receiving corps in the league. WR Greg Little struggled somewhat as a rookie, however, but showed signs that he could blossom into a very good receiver.  A Blackmon-Little combo could really jump start the Browns’ offense and propel Colt McCoy into becoming a quality QB.

Which player will make the Browns a better team in 2012

Which player will make the Browns a better team in 2012

Richardson may be the best prospect to come out of the RB position since Adrian Peterson in 2007. Richardson’s presence would divert the attention of opposing defenses from the passing attack and allow McCoy to do more things in the west coast offense.  Whether he is grinding out yardage from the line of scrimmage or catching it out of the backfield, Richardson would be a solid contributor in 2012 and the Browns' offense would be much more productive.

While draft experts and Browns fans could argue until doomsday—around December 21 if you believe the Mayans—over who is the best fit, there is pretty much a consensus that each player would be a solid contributor right away. Therefore, it may be in the Browns’ best interest to make sure they would get a least one of the trio, while also attempting to stockpile an additional second-round pick.

The Browns could trade with the Buccaneers at #5 or more likely the Rams at #6 and still be assured that one of the above mentioned guys will wear the orange and brown in 2012. After last year’s 4-12 season, it is obvious that the Browns are more than just one or two players away from contending. After the Griffin trade, the Rams now have a ton of draft picks over the next few years and would more than likely love to jump up and grab Blackmon.

The end result would be the Browns having one of the three impact player they covet, along with the #22, #33 (or #36 for Tampa), and #37 overall selections.  If the Browns could acquire the #33 pick from the Rams, that would be the top pick in the second round and one of the most coveted selections in the draft due to its second-day trade value.

With the Browns’ main areas of need being WR, OT, CB, and either DE or OLB, trading down slightly in the 2012 draft could go a long way toward repairing the ship and moving it out into the jet stream!