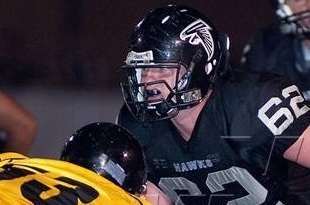 Alta High's Jordan Black signed a letter of intent to play for the BYU Cougars this past February.

The decision was a surprise to many who knew Black, since he had grown up as a big University of Utah fan. But a life-altering experience helped lead him to Provo and Bronco Mendenhall’s program.

With the encouragement and support of a close friend, Black investigated becoming a member of the Church of Jesus Christ of Latter-day Saints.

He joined the Church just days before making a recruiting visit to BYU and meeting with Coach Mendenhall. Already on a spiritual high, his experiences on that trip convinced him that BYU was the right place for him.

During this past year Black was hampered by a knee injury that forced him to have surgery after the season. He says that the surgery was successful, and that he is 100 percent recovered.

He says he's ready to don the white and blue at BYU this fall.

We caught up with Black and had a chance to talk about his story, his thoughts on serving a mission, and his hopes for a successful career as a Cougar.

We'd like to send you the most entertaining BYU Football articles, videos, and podcasts from around the web.