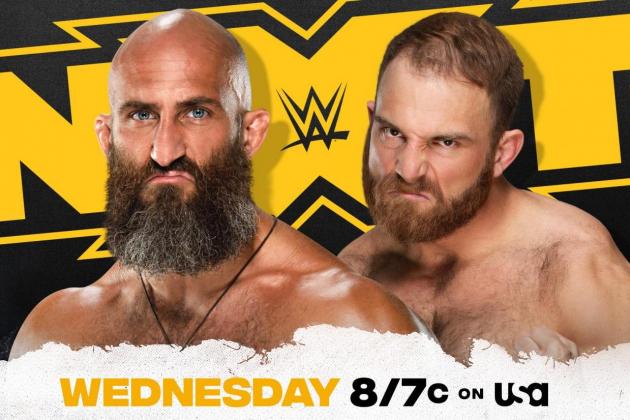 The Dusty Rhodes Tag Team Classic has taken over WWE NXT. This tournament is no longer just a single-gender tag team experience as the women will now compete at the same time as the men.

The January 20 edition of NXT included three big matches in the Dusty Classic. First, for the men, Johnny Gargano teamed up with Austin Theory. The two members of The Way would fight their recent rivals Kushida and Leon Ruff.

The first round of the women's Dusty Classic began with underdogs Kacy Catanzaro and Kayden Carter fighting two of the most dangerous women in NXT. Toni Storm and Mercedes Martinez have been after Io Shirai but were glad to make history in the tag team tournament first.

All of this was building up toward the main event where Tommaso Ciampa would step into the NXT Fight Pit against the man who brought it to the black-and-gold brand, Timothy Thatcher. All that could be predicted was pure unadulterated violence.

This show had a packed card that was promised a week back, setting up some of the best wrestlers in the world to go out and compete at the highest level.

Austin Theory showed an impressive ability to counter the speed of Leon Ruff and Kushida, keeping the heels in the match after Johnny Gargano got overconfident. Theory, though, made the big mistake of trying to grapple with Kushida, who was able to easily counter him.

The heels found the best strategy was to isolate Ruff. The Way looked cohesive throughout its domination, though Ruff fought through. He kicked out of an elevated spinning neckbreaker and hit a springboard cutter to get the tag to his partner.

Kushida planted The Rebel Heart on the outside with a DDT and then locked the NXT North American champion in a cross armbreaker. Theory barely saved his mentor. Ruff dived onto Theory to take him out of the action and then pinned The Rebel Heart clean with a double underhook suplex.

Kushida and Ruff def. The Way by pinfall to advance in the men's Dusty Rhodes Tag Team Classic.

Gargano and Theory have instantly established chemistry as a tag team. The Rebel Heart has found a rhythm with the young star that no one else could. Hopefully, they will continue to work as a tag team, even though it was not their time in the men's Dusty Classic.

Kushida pinning Gargano clean was a surprise but a welcome one. The Japanese Superstar has built up serious momentum lately. It almost feels inconceivable that he would not win the NXT North American Championship in the next month.

Pete Dunne cut a pretaped promo on Finn Balor, explaining that he was better than The Prince and both of them knew it.

Ashante Thee Adonis tried to get in a few good kicks, but Karrion Kross badly injured his neck on a trio of Saito suplexes, sealing an emphatic win. Afterward, he locked in the Kross Jacket.

NXT showed a video package for MSK where Ember Moon put over the innovation of Wes Lee and Nash Carter.

What Kross needs right now is a chance to fight worthy opponents. He needs to do more than just hit a few suplexes and win. Adonis is established enough that he could have gotten in a little offense. Instead, he was squashed like every other Performance Center talent.

We have all seen it at this point. It is clear that Kross can be dominant. He can take longer than one minute to wrestle and still seem dominant. The important piece is to help the former NXT champion get back in ring shape before facing Finn Balor.

Imperium tried to set a steady pace early, but Lucha House Party was too explosive. Gran Metalik got into the action and dived onto Marcel Barthel with a splash off Lince Dorado's shoulders. The luchadors fought to the outside and got slammed by Barthel and Fabian Aichner on the hard floor.

Metalik fought back with a springboard hurricanrana and springboard moonsault to Aichner for a near-fall. Lucha House Party then hit a combination dropkick/sunset flip powerbomb, forcing Barthel to save his partner from the pinfall. Action broke down as both teams closed in on signature tag team finishers.

Dorado finally got Barthel alone to connect with a superkick and shooting star press for the win. Alexander Wolfe appeared on the stage to look upon Barthel and Aichner after their loss.

This match had potential going in, but it was absolutely above and beyond any expectations. Barthel and Aichner have been wrestling sprints so often that it was nice to see them get time and work as the true heels. Lucha House Party pushed Imperium with some incredible moves throughout.

It was great to see Metalik and Dorado working so motivated. It was the best the team has looked in years. While Imperium deserves a major run in NXT down the line with only a short NXT Tag Team Championship reign so far, this was the time to take a chance to put over an underused team.

Toni Storm and Mercedes Martinez admitted backstage they aren't friends, but they wanted to win and felt they were better than anyone else. General manager William Regal introduced Beth Phoenix, who put over how important and historic it is that the women finally got their own Dusty Rhodes Classic.

Kayden Carter set a pace from the outset that Mercedes Martinez ruined when she planted Kacy Catanzaro with a tilt-a-whirl slam. Toni Storm got into the action but ran into a buzz saw in a purely motivated Carter.

Catanzaro crashed into Martinez outside, sending both into the announce table. Storm planted Carter with a German suplex and then locked in a single-leg Boston crab. Io Shirai attacked Martinez outside, leaving Storm to take a spin-through leg lock to set up a corkscrew 630 splash for the win.

Backstage, Carter and Catanzaro made clear they would win the whole tournament. A brawl broke out between Storm and Shirai after the result.

Carter and Catanzaro def. Storm and Martinez by pinfall to advance in the women's Dusty Classic.

This was a true arrival for Carter and Catanzaro. Arguably the only true women's tag team in NXT, the two have worked hard to get an opportunity like this. Working with absolute veterans, they pulled out the best work of their careers.

While they needed to win over a team that was not established, the situation was set up well. The two heels are arguably the closest to challenging The Genius of the Sky for the NXT Women's Championship next. This sets up perfectly for Shirai vs. Martinez at the next NXT TakeOver.

Malcolm Bivens waited outside William Regal's office while Tyler Rust asked for a match against Bronson Reed. Bivens wanted Rust to face an easier opponent, but he just tried to motivate Rust once the contest was set.

The Colossal dominated Rust while Bivens seemed uncertain how to coach his client in this mostly impromptu match. Even though Rust found a few openings, he still could not stop the bigger man from planting him with the Avalanche for three. Afterward, the manager told his client to let him pick the battles next time.

The idea of Reed vs. Rust was better than the execution. The talented wrestlers worked fine together, but there was not much story and focus to the contest. The Colossal works well with those who have confidence in their ability to improvise and build a story.

Bivens and Rust are an awkward pairing. It may come together soon, and it is good to see Bivens on television again. However, the manager is still looking for his ideal client.

Finn Balor demanded a match with Oney Lorcan and Danny Burch from William Regal, and the NXT general manager only agreed if the NXT champion could find a partner. The Prince cashed in a favor and asked Kyle O'Reilly to team with him. The Undisputed Era star agreed.

Legado del Fantasma took the ring as Santos Escobar mocked the entire roster. He was certain he was the absolute best champion in NXT. As he put over Raul Mendoza and Joaquin Wilde, Lucha House Party arrived and began brawling with the trio. Curt Stallion arrived to help clear the ring of the heels.

Drake Maverick put over MSK, but he was certain he and Killian Dain would win the Dusty Classic.

The series of segments leading up to Balor asking O'Reilly to team with him worked; however, it is ridiculous that NXT thinks fans couldn't believe The Prince could team up with his biggest recent rival. The two have been helping each other just as much as hurting each other for weeks.

Legado del Fantasma vs. Lucha House Party is a fun rivalry that luckily did not end early. This segment was a time-waster, but it was nice of WWE to acknowledge the No. 1 contender to the NXT Cruiserweight Championship finally. Stallion does not feel like the man to dethrone Escobar yet.

In the pre-match weigh-in, Tommaso Ciampa and Timothy Thatcher almost got into a fight, but William Regal separated them.

The two men started above the Fight Pit where The Blackheart brutalized the technician early. The two fell off the top into the steel pit below. Thatcher turned the action by targeting the left elbow with suplexes and elbow smashes. The heel smiled as he nearly broke his opponent's fingers.

It was only with a low blow that Ciampa got back in the fight, hitting the Willow's Bell for a near knockout. The Blackheart planted Thatcher with the Fairytale Ending and then went for a submission, but the heel fought through. He trapped Ciampa's leg in the steel and used a stretcher muffler to force a tapout.

The two stared at each other with malice and a tinge of respect to end the night.

Thatcher needed to win this match, and he did just that. He looked incredible battling through the best that Ciampa could give him. He got creative but never played scared. He went after Ciampa to the point that The Blackheart resorted to more underhanded tactics to stay in the fight.

This was what it needed to be. It was physical and brutal. The technical side from both men was excellently sold. The lighting made it hard to watch in moments, but ultimately the goal was achieved. Thatcher came out looking like an unstoppable monster in his style of match.