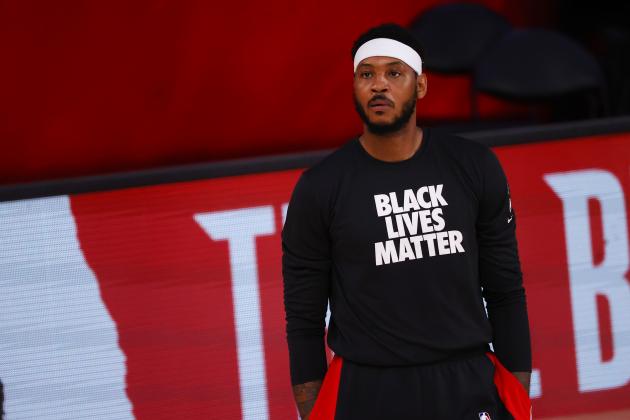 Next up on the list is Tim Duncan, who scored 26,496 points during his illustrious career with the San Antonio Spurs.

The NBA shared a look at where Anthony stands:

Congrats to @carmeloanthony of the @trailblazers for moving up to 15th on the all-time SCORING list! pic.twitter.com/h8FWiN0Z6u

Anthony, 36, has played for the Denver Nuggets, New York Knicks, Oklahoma City Thunder, Houston Rockets and now Trail Blazers since he entered the league as the No. 3 overall pick in the 2003 NBA draft.

While he has not won the championships that fellow 2003 draftees LeBron James and Dwyane Wade did, he is a future Hall of Famer largely based on his impressive scoring totals alone.

Anthony led the league in scoring with the Knicks in 2012-13 and averaged more than 20 points per game during each of his first 14 seasons. He is also a six-time All-NBA selection and 10-time All-Star who has averaged 23.6 points per game at the NBA level.

This season represents a strong bounce-back effort for the Syracuse product after he played just 10 games in 2018-19 for the Rockets and seemed like he may be headed toward retirement.

The Trail Blazers took a chance on him, and he has quickly established himself as a veteran leader and secondary scoring option alongside Damian Lillard and CJ McCollum. The team is pushing for a place in the Western Conference play-in tournament as the No. 8 or 9 seed at Walt Disney World Resort, and Anthony has been an important part of the effort.

It would still be a stunning development if he won his first career championship this season given Portland's position in the standings, but he has further cemented his Hall of Fame status with his scoring efforts.

Follow Portland Trail Blazers from B/R on Facebook and get the latest updates straight to your newsfeed!

We'd like to send you the most entertaining Portland Trail Blazers articles, videos, and podcasts from around the web.