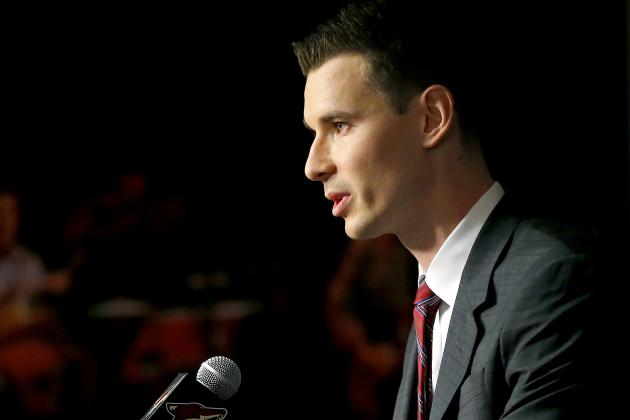 It's been one week since the Arizona Coyotes announced that John Chayka had stepped down as their general manager and president of hockey operations. In recent days, more details have emerged about what caused the split just as the team was getting ready to return to action in the NHL's bubble.

According to ESPN's Greg Wyshynski, Chayka recently met with a member of New Jersey Devils ownership after he had sought permission from Coyotes owner Alex Meruelo to do so "under the premise that it wasn't a job interview." Instead, it was for Chayka to "build relationships with owners in hockey" and "get market knowledge."

However, it led to Chayka expressing interest in leaving for New Jersey in a role originally described to be higher than GM, but Meruelo didn't want to let Chayka out of his contract, leading to their relationship becoming "strained and acrimonious," according to Wyshynski.

"Sources say things boiled over between Chayka and the Coyotes when it became clear that the job he wanted to take was rooted in hockey operations, making it much more of a lateral move than previously indicated," Wyshynski wrote, also noting that Meruelo felt "lied to" and "betrayed."

That's how the Coyotes ended up in this situation, with former assistant general manager Steve Sullivan taking over as interim GM as the team gets set to play the first game of their qualifying-round series against the Nashville Predators on Sunday. Meanwhile, Arizona will also have to see if it can work out a deal with Taylor Hall, who is set to become an unrestricted free agent after the season, down the line.

Will Sullivan be the Coyotes' GM for the long term? What moves will they consider in the offseason? Those questions likely won't be addressed until after Arizona's season comes to an end.

But as recently as the week leading up to the Coyotes' announcement of Chayka's resignation, they were still trying to have him remain with the team, per Wyshynski: "According to a source with knowledge of the call, [CEO Xavier] Gutierrez expressed the team's commitment to its general manager and what was expected of him, and then asked Chayka to reciprocate that commitment clearly, in a 'yes or no' fashion. He refused to do so."

Meanwhile, it's unclear how the Devils' reported pursuit of Chayka would have affected their front-office structure. In early July, they removed the interim tag from Tom Fitzgerald's title to make him their permanent general manager.

That answer may never materialize, as Wyshynski previously reported that the opportunity that piqued Chayka's interest "may no longer be available to him."

We'd like to send you the most entertaining Arizona Coyotes articles, videos, and podcasts from around the web.