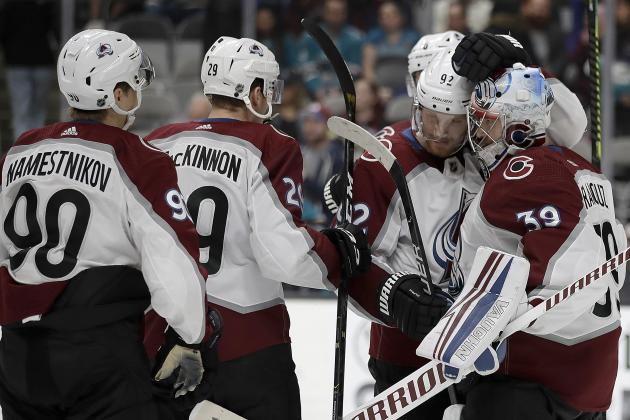 The St. Louis Blues and Colorado Avalanche begin their quests for the No. 1 seed in the Western Conference on Sunday.

The two sides will square off in the West's hub of Edmonton, Alberta, in the first of their three round-robin games that will determine the order of the top four seeds. The Boston Bruins and Philadelphia Flyers will embark on the same challenge in the Toronto hub. The Washington Capitals and Tampa Bay Lightning enter the competition Monday.

In the qualifying-round games, the Nashville Predators, Vancouver Canucks and Toronto Maple Leafs will try to avoid upsets as the higher seeds, which the Edmonton Oilers and Pittsburgh Penguins suffered Saturday.

A handful of factors are playing in Nashville's favor ahead of Sunday's contest.

The Predators carry more postseason experience than the Arizona Coyotes, won the most recent meeting between the sides and finished the regular season with six wins in nine contests.

Additionally, the Predators proved in October they are capable of a strong start after an extended break. They opened with four wins in six games, with three of those victories coming over Minnesota, Vegas and Washington.

Nashville has also done a good job with containing Yotes danger man Taylor Hall, as he has averaged less than a point per game in 22 career meetings with the Predators.

The Predators could exploit Arizona's defense, which allowed 16 goals in its final six regular-season contests. Arizona boasts the third-best goals allowed total in the NHL, but it conceded fewer than two goals in four games after February 1.

If Roman Josi, Filip Forsberg and the Nashville attack can pounce on Arizona early, it should avoid the same fate that befell Edmonton and Pittsburgh on Saturday.

The Blues and Avalanche averaged 7.25 goals per game in their four regular-season meetings.

The last two were shootouts won by Colorado, which put up 12 goals over 120 minutes.

Those totals go against the defensive records of the Western Conference sides, as they ranked sixth and seventh in goals allowed.

In those two January meetings, the top scorers on both squads featured on the scoresheet. Nathan MacKinnon and Andre Burakovsky had two goals for the Avalanche, while Mikko Rantanen had one. Alex Pietrangelo scored once in each contest for the Blues, and Ryan O'Reilly wracked up three assists.

Both sides proved they could score at will following a long break in October. Colorado produced 22 tallies during a five-game winning streak, and St. Louis recorded 14 goals in its first four games.

The other advantage for the over to hit is the Edmonton hub saw two more goals in a pair of games Saturday than a trio of contests in Toronto.

Given the teams' propensity to score, St. Louis and Colorado could help the Western Conference games total more goals for the second day in a row.