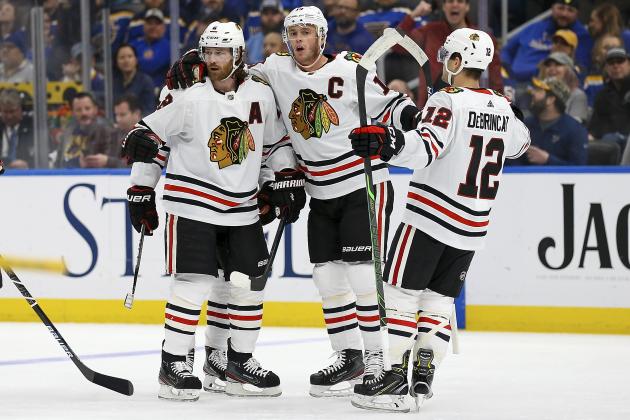 The first day of the Stanley Cup playoffs qualifying round produced a pair of upsets out of No. 12 seeds.

The Chicago Blackhawks barnstormed the Edmonton Oilers defense, scoring six goals to deliver the most surprising result in the Western Conference hub in Edmonton, Alberta. The Montreal Canadiens needed overtime to get past the Pittsburgh Penguins to send shock waves through the Eastern Conference hub in Toronto.

The Carolina Hurricanes, Calgary Flames and the New York Islanders all avoided upsets in the first games of their respective best-of-five series.

The other three qualifying round series will open up Sunday, and a pair of round-robin games will start to determine the placement of the top four seeds in each conference.

Carolina ended its string of poor results against the New York Rangers on Saturday.

They jumped out to an advantage in 61 seconds in Saturday's qualifying round opener. Prior to the series-opening win, the Hurricanes lost all four regular-season games to New York, with three of them coming by multiple goals.

Jaccob Slavin produced the first goal of the NHL's restart off assists by Teuvo Teravainen and Sebastian Aho:

Aho, who led the Hurricanes with 66 regular-season points, netted his sixth career postseason goal to follow up Slavin's tally:

Rangers forward Mika Zibanejad believed his team was outplayed from the start against the No. 6 seed, per NHL.com's Dan Rosen.

"I feel like they outcompeted us, really," Zibanejad said. "We didn't really click. I don't think we were able to get on the same page. We had some OK chances, but we couldn't establish a good power play and get some momentum from it."

The Game 1 win could be important for Carolina's confidence. It went 2-4 and scored more than twice once in Games 1 and 2 en route to the Eastern Conference Final last postseason.

Chicago became the first lower seed to notch a victory in the qualifying round.

Rookie Dominik Kubalik notched three straight assists on the final three goals of that run, and he added a pair of goals in the second period:

Blackhawks captain Jonathan Toews came close to matching the first-year player's production with two goals and a pair of assists:

Two goals for @JonathanToews and three points for Dominik Kubalik in the first. 🔥 #StanleyCup Qualifiers

Dominik Kubalik (2-3—5) became the first player in NHL history to record five points in his playoff debut, besting Daryl Evans' mark during Game 1 of the 1982 Division Semifinals with the Kings (2-2—4). #StanleyCup #NHLStats pic.twitter.com/qCiNQjWYHy

McDavid felt Edmonton was underprepared for its opener in the Western Conference hub, per Sportsnet's Mark Spector: "We just weren't ready. Not good enough all around. Pretty easy. We definitely didn't take them lightly. They're battle-tested. They came out and did exactly what we thought they would do. We just weren't ready."

The concession of six goals tied a season-worst total for Edmonton, who lost back-to-back games on three occasions in the last 11 regular-season games.

The Islanders turned in the best defensive performance Saturday, as Semyon Varlamov turned away 27 of the Florida Panthers' 28 shots.

Jean-Gabriel Pageau scored early to help to hand the Islanders their fourth win over the Panthers this season.

Pageau, who was acquired from the Ottawa Senators at the trade deadline, drew praise from Islanders head coach Barry Trotz, per NHL.com's Brian Compton.

Pageau now has 13 career postseason goals between his time with Ottawa and New York. It was his first playoff tally since May 13, 2017.

Montreal opened up a two-goal advantage before Pittsburgh leveled in the second period through goals from Sidney Crosby and Bryan Rust.

The Penguins had a chance to win the contest through a third-period penalty shot from Conor Sheary, but he was denied by Carey Price. Jonathan Drouin had a similar opportunity fall to him in overtime, but he failed to put his shot on Matt Murray's net.

According to Sportsnet Stats, Saturday was the first time since March 29, 1923, in which two penalty shots were awarded in a single playoff game.

Jeff Petry, who had the highest plus-minus of any skater, broke the deadlock with 6:03 left in the first overtime:

BOOM! That's an OT victory for the @CanadiensMTL in the #StanleyCup Qualifiers pic.twitter.com/1RYZI9Kt20

The Penguins enter Game 2 on a seven-game playoff losing streak. They were swept by the Islanders last season and lost their final two games in the second round to the Washington Capitals in 2018.

The Flames used a trio of second-period tallies to create separation from the Winnipeg Jets.

Johnny Gaudreau leveled the scoring with his fifth-career postseason tally and his first since 2015.

Tobias Rieder and Mikael Backlund followed with tallies of their own to open up the advantage on the ninth-seeded Jets. Andrew Mangiapane added another goal late in the third period for the eighth-seeded Flames.

The biggest story from the game was the injury suffered by Mark Scheifele in the first period. The Winnipeg forward left the ice with a leg problem. Scheifele is a vital part of Winnipeg's attack, and he thrived in the 2018 postseason, with 14 goals in 17 games. If he can't continue in the series, the Jets would be at a disadvantage in the attacking zone.