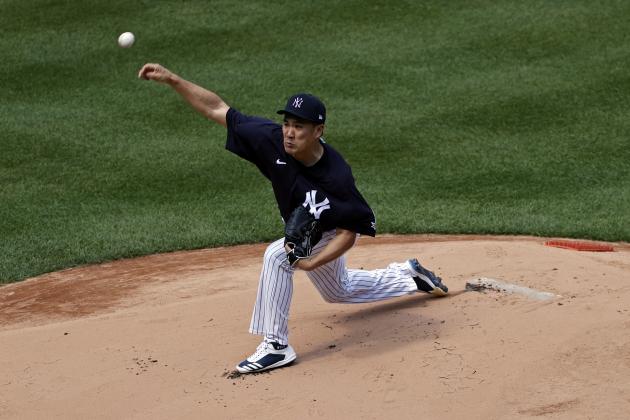 New York Yankees pitcher Masahiro Tanaka will wear a protective liner inside his cap when he makes his season debut Saturday against the Boston Red Sox.

Tanaka was hit in the head by a line drive during a summer training session July 4.

He told reporters that Yankees trainers suggested the safety measure, and it felt comfortable.

The insert is made of carbon fiber-Kevlar, and Tanaka may not be alone among Yankees pitchers in sporting it this season.

This is the protective insert Masahiro Tanaka will wear on the mound tomorrow — a reaction to getting hit in the head w/ a 112-mph line drive. Several other Yankees requested it, too. Here is breakdown of exactly what will be keeping Tanaka safe: https://t.co/Liz7dRSusM pic.twitter.com/FIFdgDD0Q8

According to NJ.com's Brendan Kuty, multiple teammates have also requested to use the protective gear, prompting the team to order more from the manufacturer, Safe Sport Technologies.

The version worn by Tanaka will cover the right side of his head. He told reporters he's used it while facing live hitters in simulated games ahead of Saturday's start.

After the line drive off the bat of Giancarlo Stanton hit his head during practice, Tanaka was able to walk off the field under his own power and was later diagnosed with a mild concussion.

The 31-year-old is one of the Yankees' most important pitchers once again. Coming off his second All-Star appearance in 2019, Tanaka has moved to the middle of New York's rotation where he'll work behind the likes of Gerrit Cole.