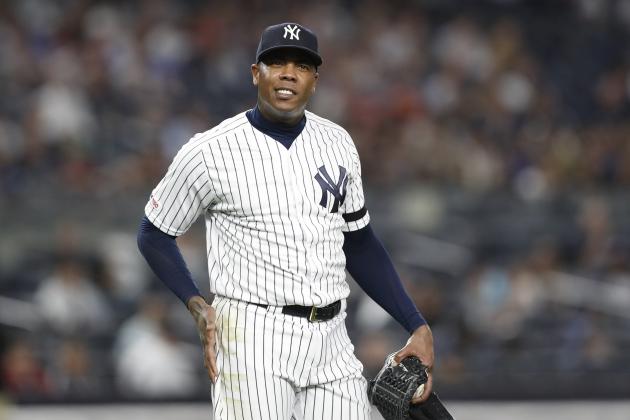 Manager Aaron Boone confirmed Friday that Chapman has been cleared to return to the Yankees after being placed on MLB's COVID-19 list on July 11.

"The good thing was he was never really sick, so he was able to maintain probably a level of physical conditioning that other people may not have been able to," Boone said before Friday's game against the Boston Red Sox, per Jake Seiner of the Associated Press.

Though Chapman has rejoined the team, Boone was unsure when the southpaw would be ready for game action.

"I'm hopeful he's a little ahead of the game from where some other people might be," Boone said.

Boone had told reporters that Chapman had "mild symptoms but overall is doing well" when the team announced his positive test.

Even though Chapman has been cleared to return, it's unclear when the Yankees will use him in games.

Sports Illustrated's Max Goodman noted Yankees pitcher Luis Cessa was cleared to return from the coronavirus 10 days ago but is still building up his arm strength in order to pitch in games.

Rivera noted that Chapman told reporters on July 9 that he was "feeling game-ready" after throwing just two bullpen sessions.

The Cuban did pass all of the initial intake testing last month required by MLB before reporting to summer camp. The 32-year-old recorded 37 saves with a 2.21 ERA, 85 strikeouts and allowed 38 hits in 57 innings last year in an All-Star campaign.

The Yankees (4-1) are scheduled to host a three-game series against the Boston Red Sox (3-4) starting on Friday.