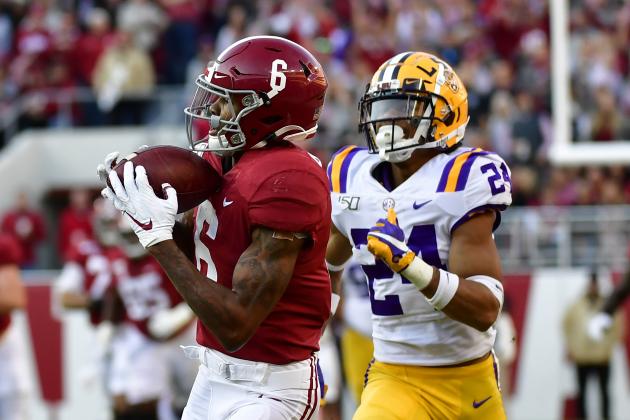 The SEC announced Thursday that it will follow the Big Ten and Pac-12 in adopting a 10-game conference-only schedule for the 2020 college football season.

Conference officials are also pushing the start of the season for its member schools back to Sept. 26, a delay of three weeks from the original date.

SEC teams will play six games against the teams from their own division and then four games against non-divisional foes. Dellenger also explained to decision to push the start date back:

From speaking to more SEC officials about the delayed start:

Medical experts advised the league to push back the date deeper into September, wanting to (1) monitor what happens in the pros and 2) account for spikes when students arrive/camp begins.

That leaves the ACC as the outlier so far in terms of restructuring. The ACC announced a 10-plus-one model in which teams have 10 conference games and one nonconference clash.

The 2020 Football Schedule Model has been announced.

The approach allowed ACC programs to maintain any annual rivalries they have outside of the conference, with Clemson-South Carolina and Florida State-Florida among the notable examples. Now, those are no longer an option, along with a handful of highly anticipated matchups.

Thursday's news leaves the Big 12 as the lone Power Five conference yet to make any COVID-19-related scheduling changes and with limited options. ESPN's Heather Dinich spoke with conference commissioner Bob Bowlsby, who said university presidents will look at four or five models on Monday.

Oh, and the Big 12 has canceled its virtual football media day scheduled for Monday with board of directors meeting later that day to make decision on schedule,

Beyond potentially making the season easier to navigate during the pandemic, Dellenger posited the SEC might end up saving some money with a 10-game conference-only format.

Group of Five and FCS schools routinely rake in millions by agreeing to dates with prominent schools. Alabama, for example, originally had Georgia State, Kent State and UT-Martin lined up as part of its 2020 nonconference slate.

According to Dellenger, SEC schools might have to pay a cancellation fee in some instances but could avoid those fees based on language regarding "league scheduling format" written into some game contracts.