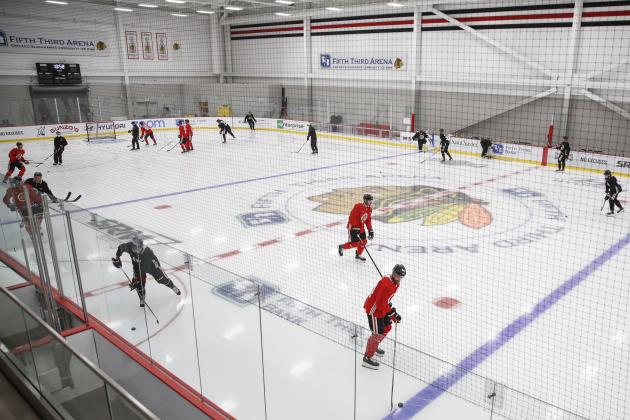 The Chicago Blackhawks are banning fans from wearing headdresses for the team's games at United Center and official team events.

The Blackhawks released a statement on the decision:

"We have always maintained an expectation that our fans uphold an atmosphere of respect, and after extensive and meaningful conversations with our Native American partners, we have decided to formalize those expectations. Moving forward, headdresses will be prohibited for fans entering Blackhawks-sanctioned events or the United Center when Blackhawks home games resume. These symbols are sacred, traditionally reserved for leaders who have earned a place of great respect in their Tribe, and should not be generalized or used as a costume or for everyday wear."

The move comes as some sports franchises that have relied on Indigenous imagery and themes for their mascots are pivoting in a new direction.

The Washington Football Team ditched its old nickname and will utilize the more generic moniker as a placeholder until a replacement is finalized.

The Cleveland MLB team, having already ditched Chief Wahoo, announced July 3 it would look into a possible name change.

Team owner Paul Dolan subsequently said the franchise "will engage Native American leaders to better understand their perspectives, meet with local civic leaders, and continue to listen to the perceptions of our players, fans, partners and employees" about the matter.

The Blackhawks have already said they aren't exploring a rebrand, explaining that their "name and logo symbolizes an important and historic person, Black Hawk of Illinois' Sac & Fox Nation, whose leadership and life has inspired generations of Native Americans, veterans and the public."

The Blackhawks are resuming their season Saturday against the Edmonton Oilers for a five-game Stanley Cup qualifier. It's unclear when the team's ban on headdresses will be put to the test since the COVID-19 pandemic has put an indefinite hold on large public gatherings such as sporting events.

We'd like to send you the most entertaining Chicago Blackhawks articles, videos, and podcasts from around the web.