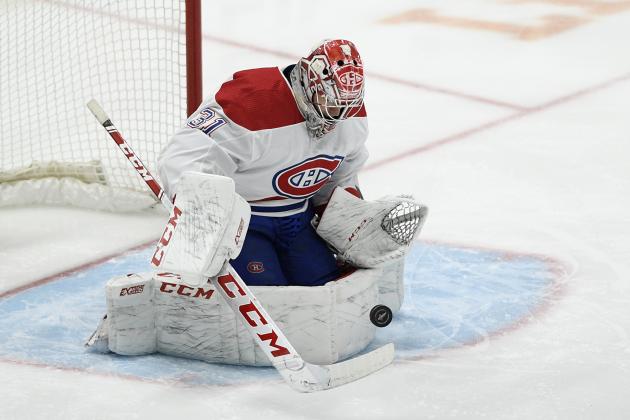 Carey Price has spent his entire 13-year NHL career with the Montreal Canadiens. And while some of his numbers have been down in recent seasons, he's proved to be a strong option in the net for the Habs.

Now, the goaltender and the Canadians are preparing to play their qualifying-round series against the Pittsburgh Penguins in Toronto. They were the last team to be included in the Eastern Conference as the No. 12 seed, and they'll be facing a difficult challenge in this best-of-five series.

Price's play could be deciding factor on whether the Canadiens have a chance to upset the Penguins. But either way, his future in Montreal could be solid, according to Eric Engels of Sportsnet.

"Obviously management isn't going to be particularly thrilled if the team plays exceptionally well and Price proves unreliable," Engels wrote. "But even something like that could boil down to the uniqueness of this unprecedented situation. And the Canadiens aren’t looking to trade Price one way or the other."

Engels also noted that trying to trade Price, who is signed to an eight-year, $84 million deal that doesn't expire until after the 2025-26 season, would "prove difficult with a stagnant cap—or even with a slowly escalating one." He added that it could be "exceedingly difficult to obtain anything valuable in return if they tried to trade him following a disappointing stint."

However, Price has played well in the past when the stakes were high. When the Canadiens last reached the playoffs in 2017, he had a 1.86 goals-against average and .933 save percentage in six games.

Regardless of how he plays once the 2019-20 season resumes, though, it appears his future remains in Montreal.

Could the Sabres trade their 1st-round draft pick?

Entering his first offseason as the general manager of the Buffalo Sabres, Kevyn Adams will have some important decisions to make that will certainly impact the team's future. Of those, perhaps none will be bigger than what the Sabres should do with the No. 8 pick in the 2020 NHL draft.

The Athletic's John Vogl noted that whether Buffalo trades the selection will be "the biggest thing to watch between now and the October draft." And he added that he believes there's a "50-50 chance of the pick moving for a player."

The Sabres have some talented players already on their roster, led by center Jack Eichel, who had 36 goals and 42 assists in 68 games this season. Perhaps the team will feel it can add the right pieces around the 23-year-old this offseason to become a contender.

As Vogl noted, it will likely take "two to three years" for a prospect who gets selected at No. 8 in the draft to contribute. So, Buffalo's timeline could impact the decision it makes.

Adams was named Sabres GM in June after Jason Botterill was fired. Buffalo was one of the seven teams not included in the NHL's 2019-20 season restart, and it hasn't reached the playoffs since 2011. Its last postseason series win came in 2007.

This is the first time Adams has been an NHL GM, as he previously was an assistant coach for the Sabres from 2011-13 and was hired as their senior vice president of business administration in 2019.

Consequently, there will be a lot of eyes on him as he tries to lead Buffalo back to success in the years to come.