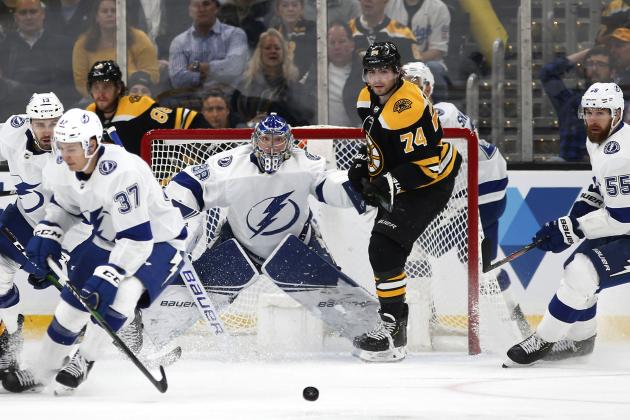 Of the 24 teams in the NHL bubble cities of Toronto and Edmonton, Alberta, 16 will immediately play in best-of-five qualifying-round series. While the winners advance to the opening round of the playoffs, the losers' seasons will come to an end.

There's a bit less pressure for the other eight teams. The top four franchises in the Eastern Conference and the top four in the Western Conference have already secured postseason berths and will be playing round-robin games against each other to determine the seeding for the first round of the Stanley Cup playoffs.

The round-robin games will be played with regular-season overtime and shootout rules. If there are any ties in the standings after each team plays its three games, they will be broken by regular-season points percentage.

Before the season was suspended, the Boston Bruins had a sizable lead atop of the Eastern Conference. They had 100 points and were well ahead of the Tampa Bay Lightning (92), Washington Capitals (90) and Philadelphia Flyers (89).

But any of those four teams could end up as the No. 1 seed by playing well over this three-game stretch. And that will give the Lightning the opportunity to be the top seed in the Eastern Conference for the second straight year.

Tampa Bay was not playing well before the season was suspended, having lost seven of its last 10 games. So a four-month hiatus may have helped the team. However, one of the Lightning's wins during that stretch came against the Bruins, whom they went 3-1 against during the regular season.

After they suffered a shocking four-game sweep to the No. 8-seeded Columbus Blue Jackets in last year's playoffs, Tampa Bay will be motivated for better results in 2020, and it will use that to claim the top seed.

The Bruins won't fall too far, though, as they proved throughout the regular season why they are among the top Stanley Cup contenders. They'll secure the No. 2 seed.

Although the Capitals had a strong regular season, they will be without goaltender Ilya Samsonov the rest of the season because of injury. That means they will have to rely on veteran Braden Holtby in the net. And if he can't return to his old form, they may have a difficult time. During the regular season, Holtby had an .897 save percentage and 3.11 goals-against average—both career-worst marks.

Washington also struggled against Philadelphia, going 3-1 against the Flyers in the regular season. Philadelphia won the teams' last three meetings, outscoring Washington 15-6 in those contests.

The Flyers will continue their recent dominance over the Caps to help them secure the No. 3 seed.

After winning their first Stanley Cup last year, the St. Louis Blues arrived in Edmonton looking to begin their quest to join the Pittsburgh Penguins (2016 and 2017) as recent back-to-back champions. And they could be in good position to secure the No. 1 seed.

St. Louis won 10 of its last 12 games before the season was suspended. The Blues have been a streaky team in 2019-20, so if they can pick up a few wins when the season resumes, it's possible they will get hot and make another deep run through the playoffs.

That should begin with St. Louis playing well enough during the round-robin games to secure the top seed. With a strong defense and goaltenders Jordan Binnington and Jake Allen to call upon, the Blues will be tough to beat.

Along with the Blues, the Colorado Avalanche were the other clear top team in the Western Conference in the regular season, and they are the only two to eclipse the 90-point mark. Colorado should be the biggest threat to take the No. 1 seed away from St. Louis and is likely to earn at least the No. 2 seed.

Among the eight teams playing round-robin seeding games, the Vegas Golden Knights (86) and Dallas Stars (82) had the fewest points in the regular season. It's possible one of these teams will get hot in the playoffs and make a run. But for now, it's likely those teams will be the Nos. 3 and 4 seeds.

So the prediction here is that the round-robin games won't change the seeding in the Western Conference, with the Blues (No. 1), Avalanche (No. 2), Golden Knights (No. 3) and Stars (No. 4) finishing in that order.