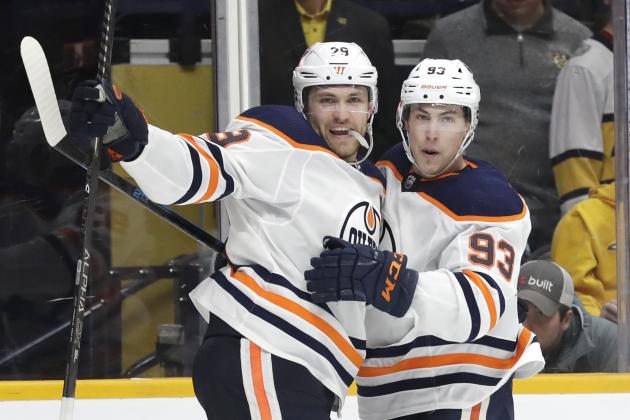 The four highest seeds in the NHL's Western Conference qualifying round did not fare well against their respective opponents in the regular season.

Edmonton, Nashville, Vancouver and Calgary combined to go 4-5 versus the quartet of teams that was added to the playoff field in the 24-team format.

That could lead to some unpredictable results in the Edmonton hub, which kicks off play with Saturday's clash between Edmonton and Chicago.

There is potential for the Oilers to crash out in the qualifying round given their history with the Blackhawks.

Chicago won two of its three regular-season meetings and put up three goals in its lone loss to Edmonton, which came without Connor McDavid.

The No. 12 seed in the West reeled off five wins in its final seven regular-season contests. In those games, Chicago conceded three goals on one occasion. However, Edmonton was the lone squad in that stretch to put up a trio of tallies on the Chicago defense, and it possesses one of the most dynamic attacks in the NHL.

Leon Draisaitl and McDavid combined for 207 points, and there is depth beneath them in the form of Ryan Nugent-Hopkins, Zack Kassian and James Neal.

Edmonton also has a pair of defensemen in Oscar Klefbom and Darnell Nurse who both racked up over 30 points.

The Oilers should be able to overpower Chicago over five games, but it could be a tough fight with the Stanley Cup-winning experience of Patrick Kane, Jonathan Toews and Duncan Keith on the other bench.

Nashville carries a wealth of recent playoff experience into its series with Arizona; the two split their season series.

The Predators have won a playoff series in three of the last four seasons and should be motivated to come back stronger after they were eliminated in the first round by Dallas last season.

Nashville also proved it could win in bunches toward the end of the regular season. It produced a trio of three-game winning streaks in February and March, and it won four out of five from January 29 to February 6.

Since January 9, Arizona strung together consecutive victories on two occasions, with one of those runs coming against Washington and the New York Islanders.

The Coyotes could have the best player on the ice in Taylor Hall, but their inconsistency makes them hard to trust over five games.

No. 10 Minnesota over No. 7 Vancouver

Minnesota could be in the best position of the four lower seeds to win a best-of-five series.

The Wild put eight goals past the Canucks in their two regular-season victories, and they recorded 12 wins since February 4. If the season went on as planned, Minnesota might have been able to clip the No. 7 or 8 seed because of how well it was playing.

Each of their games could be high-scoring affairs, as both sides rank among the top five in the West in goals conceded and among the top six in goals scored.

Minnesota has seven players with over 30 points and Vancouver had nine skaters reach that total.

If the Wild make Jacob Markstrom uncomfortable in the Canucks net and limit Vancouver's scoring opportunities in a game or two, they could advance.

One of the qualifying-round series could be won by a hot goalie, and that could very well be Connor Hellebuyck as Winnipeg chases a championship.

The 27-year-old has improved his save percentage (.922) and goals-against average (2.57) compared to last season and owns 11 playoff victories. In 23 postseason appearances, Hellebuyck has a .919 save percentage and 2.44 GAA.

Hellebuyck has a 1.97 GAA in nine matchups against the Flames, and if the Jets advance, he could thrive against St. Louis, against whom he has a 2.07 GAA.

If Hellebuyck shines against Calgary, Winnipeg's top-end attackers could make quick work of the Flames.

Kyle Connor, Mark Scheifele, Blake Wheeler and Patrik Laine produced over 60 points in the regular season and have four series worth of postseason experience from the previous two seasons.