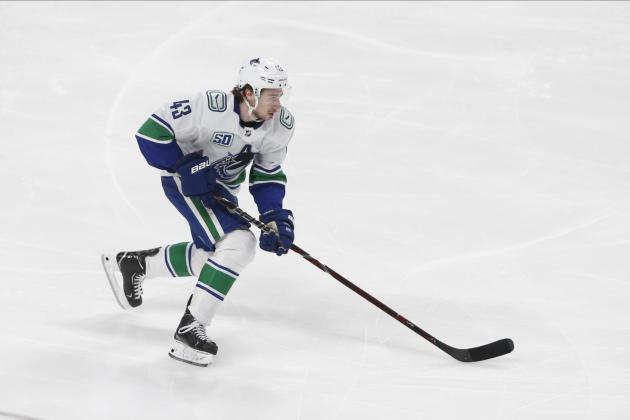 The resumption of the 2019-20 NHL season is only days away, as the qualifying round of the Stanley Cup playoffs begins with five matchups on Saturday. They'll be the first meaningful games to be played since the season was suspended due to the coronavirus pandemic in mid-March.

They will also be the first games played without fans in the NHL's two bubble cities, Edmonton and Toronto, where the 24 teams that will be in action have been preparing for the season to resume.

And according to Sportsnet's Elliotte Friedman, there have been some positive reports and enthusiasm about players' conditions since they've gotten back on the ice.

However, there's one player Friedman has heard about more than most others.

"If there was one player who seemed to particularly benefit from a rest, the name I heard a bit more than others was Vancouver’s Quinn Hughes," he wrote.

The defenseman, who was drafted by the Canucks with the No. 7 overall pick in the 2018 NHL draft, is in his first full season with Vancouver after playing only five games in 2018-19.

This season, the 20-year-old has eight goals and 45 assists in 68 games while playing a key role on the Canucks' defense.

Vancouver is scheduled to play the first game of its best-of-five qualifying round series against the Minnesota Wild on Sunday night.

Will Sullivan be Arizona's GM in the long term?

Now that John Chayka is no longer the general manager of the Arizona Coyotes, Steve Sullivan has taken over the job after previously serving as the team's assistant GM since May 2017.

However, Sullivan has been with the team for longer than that, as he played for them during the 2012-13 season and was hired as their development coach in September 2014.

However, it remains to be seen whether the 46-year-old will eventually become Arizona's permanent GM. On Sunday, The Athletic's Scott Burnside reported "several sources questioned whether he was ready for such a role at such a critical time for the franchise."

And that's not all Burnside heard about who could fill the Coyotes' job down the line.

"Several sources indicated former Boston and Edmonton GM Peter Chiarelli is someone league officials would like to help find his way back to the NHL after a disastrous turn in Edmonton and think that Arizona would be a good landing place," he added.

Chiarelli was the GM of the Bruins from 2006-15, winning the Stanley Cup with the team in 2011. Nine days after getting fired by Boston in April 2015, he was hired to be the Oilers' GM, a position he held until getting sacked in January 2019.

It's also worth noting that during Chiarelli's time in Edmonton, he traded away left winger Taylor Hall, who is currently playing for Arizona, although he's set to become an unrestricted free agent during the upcoming offseason.

Fitzgerald beat out two other finalists for Devils' GM job

After becoming interim general manager of the New Jersey Devils in January, Tom Fitzgerald had the interim tag removed on July 9. However, it appears the Devils did their due diligence in talking to other candidates.

Friedman reported Mike Futa and Laurence Gilman were the two other finalists, along with Fitzgerald, for the position.

Futa had been the assistant GM for the Los Angeles Kings since April 2017 until he left the organization earlier this year. Gilman is the assistant GM of the Toronto Maple Leafs, a position he previously held with the Canucks.

Those three weren't the only ones to interview for the Devils' job, though, as Friedman reported former Toronto assistant GM Mark Hunter, Colorado Avalanche assistant GM Chris MacFarland and former Pittsburgh Penguins head coach Ed Olczyk were among the other interviewees.

But it will be Fitzgerald looking to lead the Devils back to the playoffs for only the second time since they reached the Stanley Cup Finals in 2012.