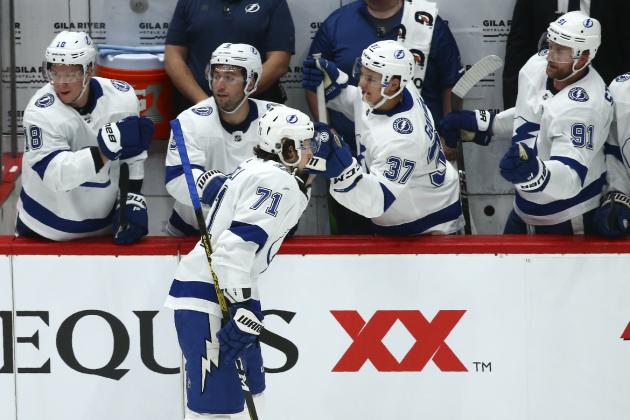 The top four teams in the NHL's Eastern and Western Conferences will not be thrust into the win-or-go home format the other 16 franchises face in the Canadian hub cities of Toronto and Edmonton, Alberta.

As eight teams are eliminated from the Stanley Cup qualifying round, the top four sides in each conference will play round-robin games to determine their seeding for the round of 16.

The Boston Bruins, Tampa Bay Lightning, Washington Capitals and Philadelphia Flyers in the East and St. Louis Blues, Colorado Avalanche, Vegas Golden Knights and Dallas Stars in the West earned the top four positions through having the best points percentages in their respective conferences.

They all have the luxury of playing spaced-out games to regain in-game fitness since the smallest gap between round-robin contests is three days.

Boston and St. Louis—the teams that contested last season's Stanley Cup Final—were in line to be the No. 1 seeds before play was suspended.

When the season was suspended in March, Boston held an eight-point advantage over Tampa Bay for the No. 1 seed.

The Bruins have better recent postseason pedigree after reaching the Stanley Cup Final in 2019, but Tampa Bay owns the more explosive offense this season, as it produced 245 goals compared to Boston's 229.

Steven Stamkos, Nikita Kucherov and Co. will carry extra motivation in Toronto after dropping out in the first round as the No. 1 seed a year ago. Tampa Bay is 3-1 against Boston and 2-0 versus Philadelphia, and if it gets two wins from those games, it should be in good shape to claim the top seed.

The biggest obstacle between the No. 1 seed and Jon Cooper's team could be the opening round-robin game against Washington, which owns three wins over the Lightning. The Capitals put up 12 goals on Tampa Bay, but all three of those victories occurred in November and December.

Tampa Bay also does not have any significant issues going into the Toronto bubble. Boston sniper David Pastrnak and Washington goaltender Ilya Samsonov, meanwhile, are "unfit to play" at the moment, per NHL.com.

The Bruins still have a multitude of scorers to call on, and Braden Holtby has a wealth of postseason experience for the Capitals, but taking away a key piece for each side, at least at the start of play, could mess with game-planning.

Philadelphia is the wild card of the four sides. It reeled off a nine-game winning streak in February and March to reach the fourth-best points percentage, which left the Pittsburgh Penguins in the qualifying round as the No. 5 seed.

During that run, Alain Vigneault's side produced four goals in all but one win and downed the Columbus Blue Jackets twice, the Winnipeg Jets and Washington.

But that streak was bookended by defeats to Tampa Bay and Boston, and in their final game before the shutdown, the Flyers were shut out by the Bruins.

Philadelphia does not carry the same experience as the other three sides. And while going in with no fear could play to their advantage, the Flyers might not be able to conjure up two results that move them above the No. 4 seed.

The Blues are the reigning champions, and they possess seven victories over Colorado, Vegas and Dallas.

The only defeats St. Louis suffered at the hands of the Golden Knights and Stars this season were in overtime or via a shootout. Colorado gave the Blues more trouble, as the Avalanche took a pair of games in January by lighting the lamp on 12 occasions.

The Avalanche had a better goal differential and scored more than the Blues in one less game, but they had trouble with Dallas in two meetings.

In addition to experience, St. Louis also has an edge in net with Jordan Binnington, who conceded a maximum of two goals in 15 postseason contests in 2019. If he shines in the round-robin opener against Colorado, St. Louis should be on the path to the No. 1 seed and the most favorable first-round matchup.

Vegas is two years removed from the Stanley Cup Final, and it has arguably the league's best goalie duo in Marc-Andre Fleury and Robin Lehner, but it conceded 26 goals in five meetings with St. Louis and Colorado this term.

Dallas benefited the most from the adoption of points percentage to determine the final regular-season standings. The Stars had one point less than the Edmonton Oilers, but they had two games in hand on Connor McDavid's team at the time play was suspended.

The Stars' impressive defense allowed a conference-best 177 goals in 69 contests, for which they should be grateful, as they have the worst scoring total of the 24 playoff teams.