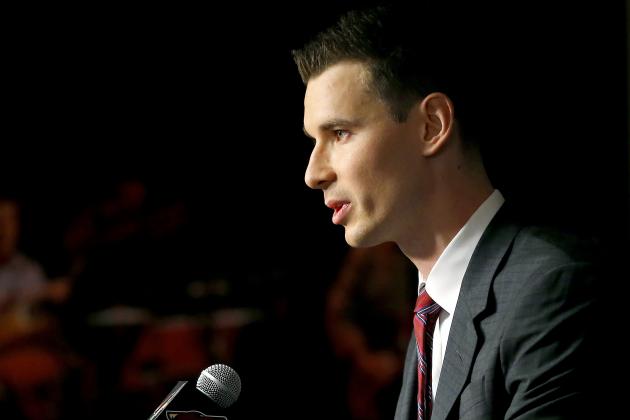 Less than a week before the 2019-20 season's resumption, the Arizona Coyotes revealed that John Chayka was no longer the team's president of hockey operations or general manager.

On Sunday, the Yotes announced that Chayka had quit and that Steve Sullivan, the team's assistant general manager, will be serving as interim GM.

According to Elliotte Friedman of Sportsnet, the relationship between Chayka and Coyotes ownership "deteriorated in a hurry." Part of that stems from the fact that Chayka received an offer from another team in the league, per Friedman.

"Some sources indicated that it was not a lateral move, bigger than the current job Chayka was doing," he wrote. "It is believed that this involves an ownership group with teams in other leagues, and Chayka could have involvement in those other teams."

Friedman added that Arizona owner Alex Meruelo initially denied the other team's request to speak to Chayka but eventually "relented and allowed the conversation."

Kent Somers and Richard Morin of the Arizona Republic reported that Meruelo "retracted permission" when Chayka had interest in the other job, causing "additional damage" in their relationship. Chayka was also unaware that members of the Coyotes front office had met with Taylor Hall, who is set to become an unrestricted free agent this offseason, about his future, not finding out about it "until the following day," per Somers and Morin.

According to ESPN's Greg Wyshynski, the other job opportunity "may no longer be available" to Chayka. Meanwhile, the situation with the Coyotes may not be over, as Friedman wrote that Meruelo will ask NHL Commissioner Gary Bettman to "adjudicate the ugly divorce" and determine Chayka's future, with one source calling it "a contractual dispute."

Chayka was named Arizona's GM in May 2016 and took over as president of hockey operations 14 months later. He signed a contract extension in November, and the deal wasn't set to expire until after the 2023-24 season.

The Coyotes are preparing for their best-of-five qualifying-round series against the Nashville Predators, which is set to begin Sunday in Edmonton, Alberta, Canada.

Who Will Be Kraken's 1st Head Coach?

It's official: The NHL's 32nd team is the Seattle Kraken. But there are still a lot of questions about the expansion franchise before it joins the league for the 2021-22 season.

Seattle general manager Ron Francis is looking to hire the team's first head coach, but according to Darren Dreger of TSN, that decision may not come soon.

"He still has time on his side, and he's in no rush; he hasn't been in a rush for quite some time," Dreger said. "Obviously, there's been some complications introduced by COVID-19, but the Seattle Kraken intend on taking the time that they have to make the right selection, and that will mean the rest of the 2019-20 season."

One rumored name for the job has been former Vegas Golden Knights head coach Gerard Gallant. Dreger said it's "safe to call him in the mix, but the process hasn't kicked into high gear just yet."

Gallant became the first head coach of the Golden Knights in April 2017, and he had an incredibly successful start, leading Vegas to a 51-24-7 regular-season record and the Stanley Cup Final in its inaugural season. He got the Golden Knights into the playoffs again in 2018-19, but he was fired midway through the 2019-20 season after a four-game losing streak, although the team was 24-19-6.

He was also the head coach of the Columbus Blue Jackets from 2003-07 and the Florida Panthers from 2014-17. But his Stanley Cup Final appearance with the Golden Knights is the only time he's led a team past the opening round of the postseason.

While Gallant could be a good fit in Seattle (especially because he has experience leading an expansion franchise), it will be interesting to see who else is on the Kraken's radar.