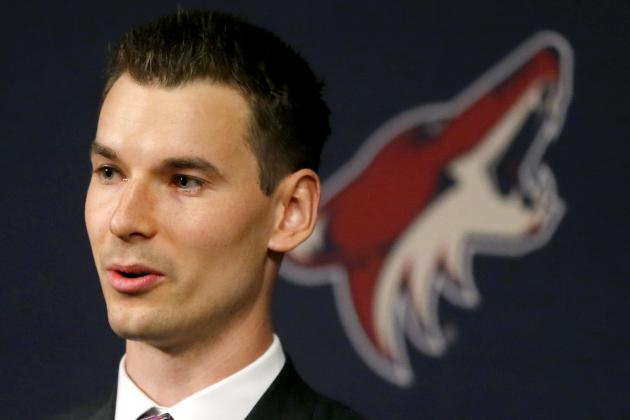 Arizona Coyotes general manager and president of hockey operations John Chayka has stepped down only days before the NHL's restart.

The club announced the news in a press release Sunday afternoon:

"John Chayka has quit as the General Manager and President of Hockey Operations of the Arizona Coyotes.

"The Club is disappointed in his actions and his timing as the Coyotes prepare to enter the NHL's hub city of Edmonton, where the team will begin post-season play for the first time since 2012. Chayka has chosen to quit on a strong and competitive team, a dedicated staff, and the Arizona Coyotes fans, the greatest fans in the NHL.

"The Club is moving forward and has named Steve Sullivan as Interim General Manager. He has the full support of the entire organization including team ownership, executive leadership, players, and coaches.

"The Club will have no further comment on the matter, as the Club remains focused on the opportunity to pursue a Stanley Cup."

In a statement to Craig Morgan of AZ Coyotes Insider, the now-former team executive responded by saying ownership had made continuing in his role an "impossibility."

Chayka, 31, was a surprise hire for the Coyotes in 2016, becoming the youngest GM in NHL history at 26 years old. He was named president of hockey operations in July 2017, and his exit comes just eight months after Chayka signed a long-term extension with the Coyotes.

Until Sunday, Arizona expected Chayka would travel with the team to Edmonton, Alberta, Canada, where the Coyotes will battle the Nashville Predators in a best-of-five series for a berth in the Stanley Cup playoffs.

Morgan noted there are conflicting reports about the disagreement that led to Chayka's exit.

One source told Morgan the GM first approached the team for his release "six weeks ago" to "pursue another professional opportunity." Another source said Chayka left after learning Coyotes owner Alex Meruelo refused to grant another franchise permission to interview him.

In any case, it may be a while before Chayka is able to find work. According to Morgan, Chayka's contract is now in dispute, potentially barring him from joining another club as general manager or president of hockey operations for the full term of his extension. Lawyers for both sides are reportedly reviewing the situation.

Arizona saw notable improvement during Chayka's time with the organization, going from 70 points in his first season to 86 points in 2018-19. However, the club still hasn't made the playoffs since 2012.

The Coyotes entered the NHL's hiatus in March with 74 points.

Throughout his tenure, Chayka was able to acquire established names and rising stars, landing the likes of Phil Kessel, Antti Raanta, Niklas Hjalmarsson and Derek Stepan.

Former NHLer Steve Sullivan, who joined Arizona as a development coach in 2014, has been named interim general manager, though Sportsnet's Elliotte Friedman reports the team could give him a "long look" at the full-time job.

We'd like to send you the most entertaining Arizona Coyotes articles, videos, and podcasts from around the web.